Call for a Consultation 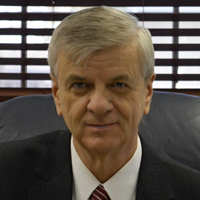 Choose a location to review

See all Reviews
Review Us

Mike Edgett began practicing in 1977 as associate to Senator William J. Cason and has continued in the same firm and its successor in Clinton ever since. Mike is a member of Elder Counsel and focuses his practice on estate planning, wills, trusts, probate and real estate practice. Mike has a very active estate planning and probate practice. He is past president of the 27th Judicial Circuit Bar Association. He is a trained and experienced mediator.  He is AV rated.

Mike Edgett is a member of Holy Rosary Catholic Church. He is a fourth-degree member of the Knights of Columbus. He served on the Board of Directors of the Samaritan Center for more than 30 years and was Board President during the construction of its present facility. He is a life member of the Clinton Sunrise Optimist Club and past distinguished President. He has served on the Board of Directors of the Education Foundation for Clinton Students Mike is a founding member of the Clinton School District Bright Futures affiliate and serves on its board of directors. He is the 2014 Greater Clinton Area Chamber of Commerce Citizen of the Year.  He received the 2015 Clinton School District Friend of Education Award. He was a Bright Futures Community Champion Award Finalist in 2016. He is active in the Heartland Community Theater. He was chosen 2019 Citizen of the Year by the Clinton, Missouri Sunrise Optimist Club.

Call for a Consultation

Cason Edgett Mahan & Lutjen LLC is located in Clinton, MO and serves clients in and around Clinton, Blairstown and Henry County.

Attorney Advertising. This website is designed for general information only. The information presented at this site should not be construed to be formal legal advice nor the formation of a lawyer/client relationship. [ Site Map ]

See our profiles at Lawyers.com and Martindale.com